Music began for me with the Alto Saxophone in the Middle school band program and I eventually branched  out to piano and drums in high school. During my high school days in Northern California, I was fortunate enough to play in many Northern California Honor Bands as well as the California All State Honor Band. Although I wasn't well versed in Jazz music, I was able to attain a scholarship from Berklee College of Music in Boston.  There I studied and heard many various types of music; Jazz, Funk, Classical, Rock, Country, Gospel and even Celtic.  I eventually focused my college program towards Film Music Composition, or Film Scoring. I learned a lot about writing music for film but my heart was not into moving to Los Angeles and getting lost in the sea of aspiring film composers. So, I got a day job and utilized the many talented musicians around my area and I composed and performed many styles of music from Jazz, Funk, R&B, Latin and  Worship music.  Performing as a keyboardist forced my saxophone to stay in the closet for many years. Carpal Tunnel Syndrome would later stop my drumming days and hinder my responsibilities as a Musical Director and Keyboardist for a Latin variety band as well as keyboardist for a Jazz Big Band Orchestra.

Having composed many pieces for various groups and in many types of instrumentation, I decided to pursue composing music for Wind Ensemble and Symphonic Band.  Thanks to Bill Doherty and the members of the Solano Winds Community Band, I was able to bring my first concert band composition "Untold Stories"  to the public in May of 2014.  During that same month my second piece,  "Fanfare For The Future" was performed by Golden West Middle School at a Concert Competition, which garnered them a First Place award.  Solano Winds Community Band premiered my holiday piece "Winter Memoirs" at their 20th season, December concert. Needless to say, I have learned a lot being a new comer to Wind Band Music, and continue to do so as I add more pieces to my repertoire.

Read some of the reviews from the recent premiers of my compositions with the Solano Winds.

Check back regularly for updates.

Thanks for stopping by. 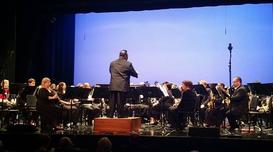